When you ask him why "Naked News" in Spanish, he answers: "We were interested in displaying it in as many languages as possible and we were fortunate to find a television distributor in APA International Film Distributors, Inc. who believed as we do, that this is an interesting and compelling program".

CONTINUES BELOW THE AD

Above all, Warga looks at the human body "as something beautiful, as Michaelangelo did perhaps."

JHC.- For some years you have aired "Naked News", HBO has been airing "Sex and the City," "Real Sex" and other shows. Hollywood puts sex in almost every film. Obviously, this happens because there is a tremendous demand from moviegoers, viewers and readers. Why do so many people need sex on TV, films and books?

WARGA.- I am not a sociologist so I cannot answer your question. However, if you believe that Naked News is sexual I would respectfully disagree with you and suggest that you have never seen it. Naked News is sensual but not sexual. We do not use sex, sexual innuendo or men and women together in any way. We employ nudity not sexuality. We do not believe that nudity is sexual, any more that Michaelangelo's David is sexual. It is simply a beautiful representation of the human body and does not have to be sexual.

Many years ago, women covered their arms and legs and to see a woman's ankles was considered provocative. Today our standard of dress or undress are more liberal. Today we have beaches where women go topless, or nude beaches. Nudity is only "dirty" if you look at it as something dirty.

We look at the human body as something beautiful, as Michaelangelo did perhaps.

JHC.- Have you found censorship in your purpose to air Naked News in Canada and other countries?

WARGA.- For the reason stated above, we have never had a problem with censorship in any country anywhere.

JHC.- What did motivate you to present "Noticias al Desnudo"?

WARGA.- When you have a product you are proud of you want to share it (or display it) to the world. We are proud of Naked News. We present an intelligent, unique and entertaining program. We were interested in displaying it in as many languages as possible and we were fortunate to find a television distributor in APA International Film Distributors, Inc. who believed as we do, that this is an interesting and compelling program.

JHC.- Is "Noticias al Desnudo" facing any kind of censorship in Latin America and the US?

JHC.- What segment of the society is more likely to watch "Naked News"? Do you expect the same segment to watch "Noticias al Desnudo" in Latin America and the US?

WARGA.- Our demographic studies show the our audience is predominantly males from 18 to 55. I would assume the same in Latin America.

There is more sex on “Beverly Hills 90210”, or “The Sopranos”, or “Sex in the City” or just about any program, day time soap opera, or evening comedy or drama than there is in Naked News. I watched a comedy series last night entitled "Two and One Half Men" and there was more sexual innuendo on that than on our program. My experience has been that people who say they are offended by Naked News, have in fact never seen it. I suggest they watch the program, and listen to the quality of the reporting and then arrive at a conclusion, rather than assuming from the name that it is "pornography". 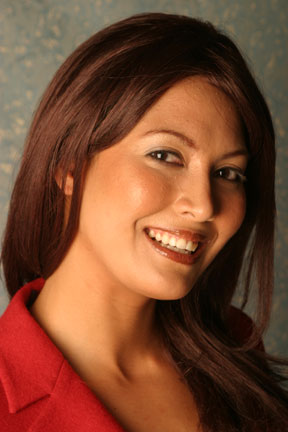 David Warga, the Canadian producer of "Naked News," is now launching "Noticias al Desnudo," a Spanish-language version of his controversial news show where sexy anchors and reporters get undressed while telling a news story to the audience.

Warga says "Naked News" is "sensual but not sexual" because the show does not "use sex, sexual innuendo or men and women together in any way."