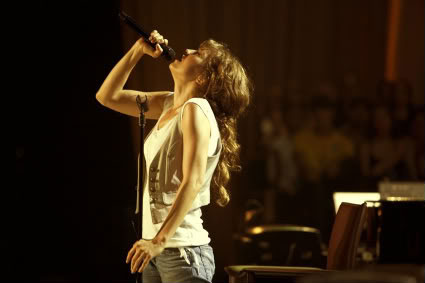 Thalia Is Still Number One in Mexico With the Song "Equivocada

That’s right: the singing superstar remains at the top of the Ritmoson Latino music chart in her native Mexico with the song Equivocada, first single from her most recent musical production, Thalia en Primera Fila.

For the first time, the Fania collection will be digitally remastered and available exclusively on Zune Marketplace. The collection will include legendary artists such as the Fania All-Stars, Hector Lavoe, La Lupe, Celia Cruz, Ricardo Ray and Bobby Cruz, Cheo Feliciano, Mongo Santamaria, Bobby Valentin, and many more.

Ximena Sariñana is the latest hot new artist tapped by MTV Tr3s for its highly popular Descubre & Download program. The multiplatform music discovery platform has been lauded by music executives as "critical" in launching new careers and by Rolling Stone Magazine as "career changing."

While many remember Dizzy Gillespie for such groundbreaking pieces as "A Night In Tunisia," others will always think of him playing a funny shaped trumpet with his cheeks so puffed up they looked as though they were about to burst. The bell of his trumpet was bent at a 45-degree angle, which Dizzy claimed was the result of someone accidentally falling on it. Ironically, he liked its new tone so much, he decided to have all of his trumpets designed with the bell pointing upwards. That became his trademark.

The Latin Grammy and Yalil Guerra

For third consecutive year Yalil Guerra and RYCY Productions have produced the music theme for the 8th Latin Grammy awards, 2007. The show will be broadcasted at Univision, November 8th, from Las Vegas, Nevada.

Fresh from the West Wing, where his character was elected
president of the United States last season, actor Jimmy Smits is
speaking up his adopted city of Los Angeles. Smits is hosting a PBS special titled "Edens Lost & Found" airing on KCET (28) at 10 p.m.

Sniffing for Democracy chronicles the adventures of a dog named Spangle who, after being arrested for criticizing the president, searches the world over for a democracy that smells right because his started to stink.

David Warga, the Canadian producer of "Naked News," is now launching "Noticias al Desnudo," a Spanish-language version of his controversial news show where sexy anchors and reporters get undressed while telling a news story to the audience. Warga says "Naked News" is "sensual but not sexual" because the show does not "use sex, sexual innuendo or men and women together in any way."