The fastest and most powerful street-legal 911 model ever is ready for launch: The new 2018 Porsche 911 GT2 RS celebrated its official world premiere at the Goodwood Festival of Speed in the UK from June 30th to July 2nd. At the heart of this high-performance sports car is a 700-horsepower twin-turbo flat-six engine. Weighing in at 3,241 pounds with a full tank of fuel, the lightweight two-seater accelerates from zero to 60 miles per hour in 2.7 seconds. The new 911 GT2 RS can reach a top track speed of 211 miles per hour, and it surpasses the 2011 911 GT2 RS by 80 horsepower. The 2018 911 GT2 RS delivers 553 lb.-ft. of torque, an increase of 37 lb.-ft. compared to the previous 911 GT2 RS.


The 3.8-liter engine in the GT2 RS is based on the power plant found in the current 911 Turbo S model. In order to increase performance further, larger turbochargers push an increased volume of air into the combustion chambers. A new additional cooling system delivers optimum cooling at peak loads by spraying water on the intercoolers when the intake air temperature reaches a determined threshold. This reduces the inlet temperature under boost and allows for optimum power output, even under extreme conditions. The customized GT seven-speed double-clutch Porsche Doppelkupplung (PDK) transmission in the new GT2 RS enables maximum efficiency with uninterrupted torque transfer. The specially developed lightweight titanium exhaust system weighs around 15 pounds less than the system used in the 911 Turbo and delivers a particularly emotional sound.

Porsche Design is celebrating the debut of this very special high-performance sports car by releasing a special-issue watch. Offering a nod to the world of motorsport, the Porsche Design 911 GT2 RS watch is exclusively available to owners of the new vehicle and can only be ordered in conjunction with the new GT model. 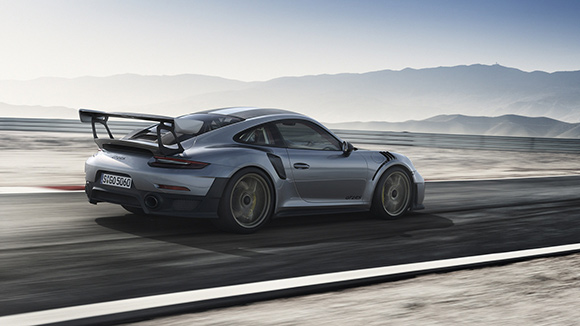 The 2018 911 GT2 RS has exceptional dry grip thanks to its race-bred chassis with rear axle steering and Ultra High Performance (UHP) tires. The stability management system is tuned for spirited driving in the new 911 GT2 RS. The PSM can be deactivated in two stages using the ESC OFF and ESC+TC OFF functions. Large air intakes and outlets and the striking rear wing underscore the emphasis on aerodynamics and down-force. The large, wide wheels with 265/35 ZR 20 tires at the front and 325/30 ZR 21 tires at the rear help ensure outstanding braking and cornering potential. The 911 GT2 RS features Porsche Ceramic Composite Brakes (PCCB) as standard. The front fenders, wheel housing vents, outer shells on the Sport Design exterior mirrors, air intakes on the rear quarter panels, and parts of the rear are made from carbon fiber reinforced plastic (CFRP), as are many of the interior components. The front luggage compartment lid is also made from carbon fiber to make the vehicle as light as possible, while the standard roof panel is made from magnesium. Both of these body panels feature a visible recess in the center, a design element previously used on the 2016 911 GT3 RS.

The optional Weissach package reduces weight by nearly 40 pounds, further enhancing the vehicle dynamics of the 911 GT2 RS. The package includes magnesium wheels and numerous elements made of carbon fiber. For instance, with this optional package, the roof and anti-roll bars are made of carbon fiber, as are the end links on both axles. The 911 GT2 RS forged magnesium wheels reduce both overall and unsprung weight by over 25 pounds, complementing the vehicle's handling characteristics. When equipped with the Weissach Package, the carbon fiber weave of the luggage compartment lid and the roof are left largely exposed, and are painted with a centrally placed decorative strip in the vehicle color for a distinctive look. The Weissach package is optionally available with an MSRP of $31,000. 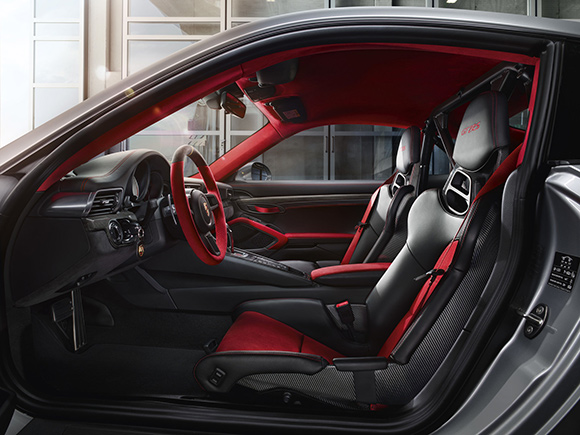 The interior of the 911 GT2 RS is dominated by red Alcantara®, black leather, and carbon fiber trim pieces as standard. The GT2 RS Sport steering wheel with shift paddles is also included as standard. Drivers and passengers can experience the driving dynamics of the high-performance sports car in Full Bucket Seats with carbon fiber reinforced backrests, which offer a high level of comfort and lateral support. As in every 911 model, Porsche Communication Management (PCM) serves as the central control unit for audio, navigation, and communication. Porsche Connect Plus and the Porsche Track Precision app are also included as standard, enabling detailed recording, display, and analysis of driving data on a smartphone.

The optional Chrono Package expands the PCM functions to include a performance display, which can be used to display, save, and evaluate lap times. The package also includes a stopwatch on the dashboard featuring an analog and digital display. The Chrono Package on the 911 GT2 RS also provides preparation for the lap trigger available from Porsche Tequipment. When using the Porsche Track Precision app in conjunction with the infrared transmitter placed at the side of the track, the lap trigger receiver enables drivers to record lap times with a higher level of precision.

Porsche Design has teamed up with Porsche Motorsport to develop the 911 GT2 RS Chronograph exclusively for 911 GT2 RS owners. The timepiece housing is made of lightweight titanium. At its heart is the first clock movement developed by Porsche Design, the product of three years' work. The caliber 01.200 includes a flyback function, a load-path-optimized movement bridge, and an official COSC certificate of authenticity.

The flyback function is inspired by motorsport and represents a special feature of the Porsche Design GT2 RS watch. On a traditional chronograph, the buttons must be pressed three times in order to measure consecutive time intervals: The first press stops the chronograph, the second resets it, and the third restarts the measuring process. On chronographs with a flyback function, these processes happen automatically and in rapid succession. The stop function and the ongoing time display are clearly separated using yellow markings. Many of the details on the timepiece are based on the design details of the GT2 RS. The tungsten winding rotor is modeled after the rims of the 911 GT2 RS. The clock face is made of carbon fiber, while the design of the time display matches the instrument cluster and the tachometer. The 911 GT2 RS and its watch counterpart are exclusively available at authorized Porsche dealers worldwide. The vehicle and watch are produced and customized in line with each customer's wishes and are delivered together.

Established in 1984, Porsche Cars North America, Inc. (PCNA) is the exclusive U.S. importer of Porsche 911, 718 Boxster and 718 Cayman sports cars, Macan and Cayenne SUVs, and Panamera sports sedans. Headquartered in Atlanta, Georgia since 1998, PCNA is also home to the first Porsche Experience Center in North America featuring a module-based 1.6 mile driver development track, business center, and fine dining restaurant, 356. The company operates a second Porsche Experience Center near Los Angeles. This 53-acre complex features a driver development track with eight educational modules totaling 4.1 miles, a business center, and Restaurant 917. PCNA employs over 300 people who provide parts, service, marketing, and training for 188 dealers. They, in turn, work to provide Porsche customers with a best-in-class experience that is in keeping with the Porsche brand's nearly 70-year history of leadership in the advancement of vehicle performance, safety, and efficiency. PCNA is an indirect wholly-owned subsidiary of Porsche AG, which is headquartered in Stuttgart, Germany. 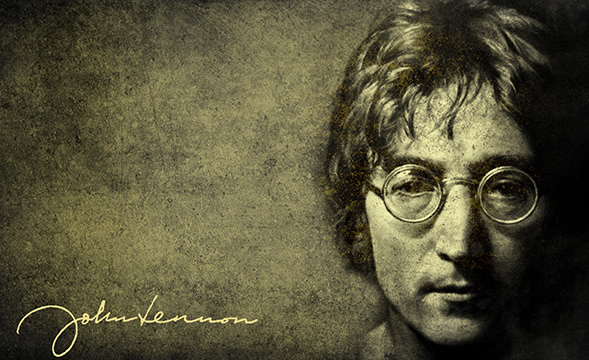 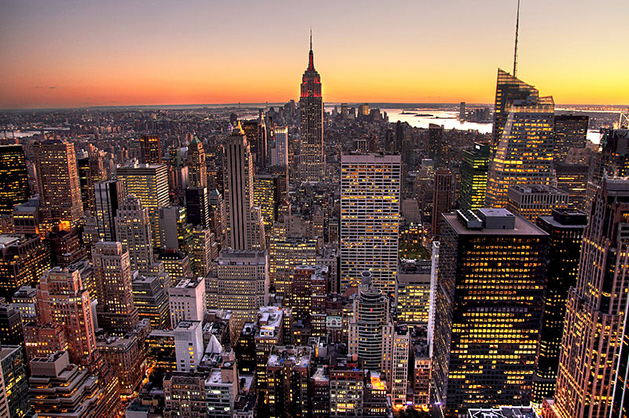 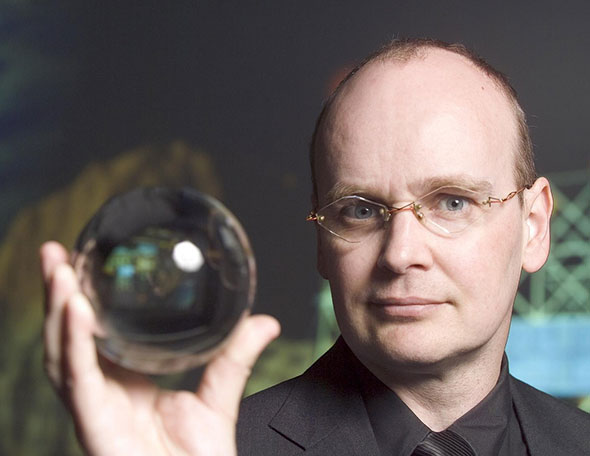 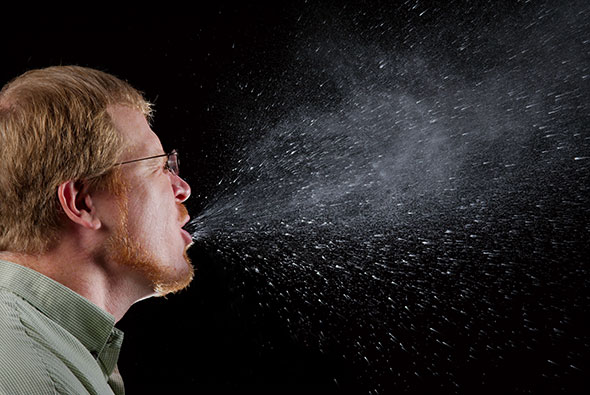 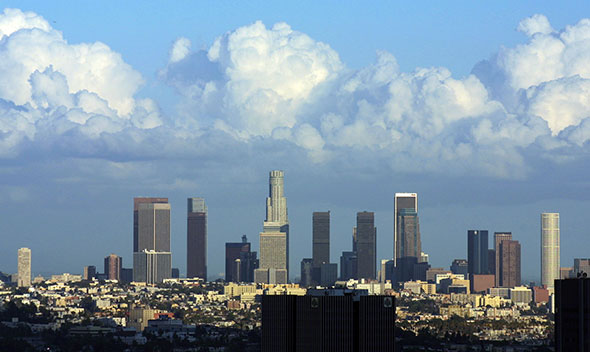 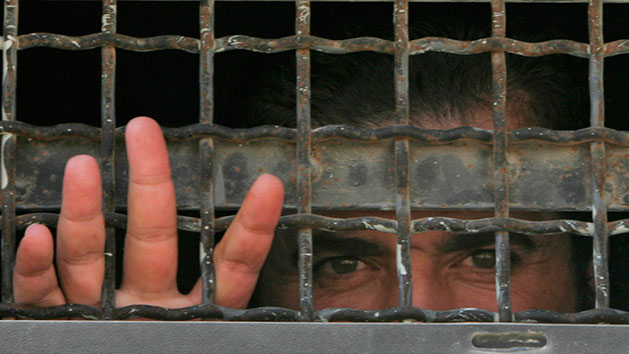 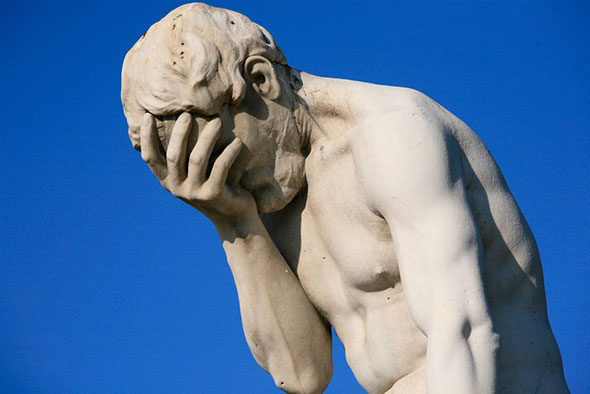