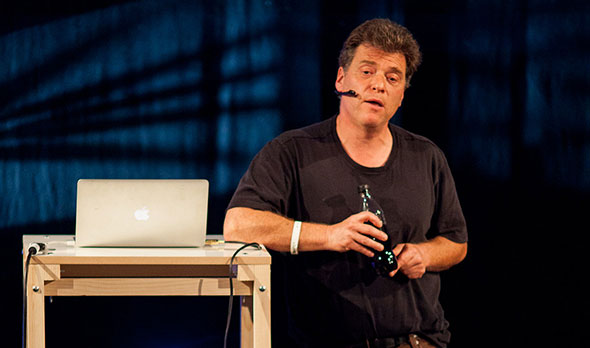 Author Andrew Keen says "the 'selfie' as the quintessential, almost inevitable conclusion, where all we are left with is ourselves. We're not able to see anything in the world except ourselves." (Common Creatives).

When asked, author and speaker Andrew Keen says he can't imagine living without the Internet.

But in his latest book, "The Internet Is Not the Answer," Keen argues that the digital revolution has been - his words - "an epic fail." The current state of the online world is one that allows a tiny minority of users access to enormous wealth and power, he argues.

During an interview with VOA's Catherine Maddux, Keen talked about his belief that the big players in the online universe – Facebook, Twitter and the like – have sold us an illusion of a digital world that is egalitarian, one that promotes economic prosperity, political equality and endless opportunities to connect and build online communities.

AK: I make it clear at the beginning of the book that the Internet has done a lot of good too. This is not an either/or kind of book. My book is a historical analysis of the Internet from its foundations after the end of the second World War through to today. We've had almost 50 years of computer communication and we've just celebrated the 25th anniversary of the World Wide Web. And what I try to do is fit the digital revolution into an overall historical context.

VOA: The book is clearly a harsh critique of the digital world; you use strong language throughout booking, writing about the Internet's disastrous impact on culture. Why do you mean exactly?

AK: "The digital revolution is…doing three things which are troubling me. The first is: compounding the inequalities between rich and poor and powerful and those without power. Secondly, it's contributing to our joblessness, what some people now call the 'jobless recovery.'

"Thirdly, the issue of the surveillance economy. I would acknowledge that there are many things that the Internet does well: communications, it can be fun, I couldn't imagine living without it. When I say the Internet is not the answer, it doesn't mean we have to go back to something else. In fact, the Internet has to become the answer. But at the moment it isn't."

VOA: Throughout the book you talk about us – human beings – as becoming mere data in the eyes of web giants.

AK: "On Facebook, we just tell them everything about ourselves. So we list our interests, our movies, our books, our networks, so they simply aggregate that up and know us in some ways better than we know ourselves, which enables them to deliver what they would probably call privatized advertising, which to me is a sort of surveillance economy.

"With Google, it's slightly different and it's slightly more complicated. Google has many different services from search to Gmail to their mapping service to YouTube. And what Google is trying to do is to encourage us to become Google members, to have Google accounts so that they know everything we're doing across the Google network – personalizing again private advertising – advertising much more accurately.

"So…we're the ones giving out our information. And we have to be a lot more careful about the kind of services we use.

AK: "I'm concerned with what I think is the rather distasteful nature of this economy, where the information we give out on, particularly on social media, really isn't our own. It becomes the property of these platform companies, who then use it to profit themselves…and I'm not sure there is anything necessarily immoral. But I think one of the purposes of the book is to simply explain the foundations of this economy."

VOA: There are examples where the Internet and connecting via social media is very useful, such as an Ebola messaging campaign for mobile users in Africa. And, of course, social media played a significant role in the Arab Spring. These are all good things, right?

AK: "Oh absolutely. Obviously, I wouldn't be against people getting health news about Ebola on their cell phones. But the Arab Spring, I think that that is a very weak argument. That Arab Spring has been a catastrophe. I'm sure most Arabs had they the choice now, if they could rewind history, they would go back to a period before the Arab Spring because it's brought civil war and mass killings.

"What's interesting about the Arab Spring and the Occupy movement and all the other movements that have come out of social media is that they are very good at destroying, but much less good at creating or building.

"So, Occupy, for example, it was the '99 percent,' with this quilt of individual voices all outraged by the supposed exploitation of the 'one percent.' We never hear about Occupy anymore. That was a failure. The Arab Spring was a failure. Now on Twitter in Libya, it's being used by kidnappers to broadcast their ransom notes.

VOA: What part of this equation could be changed to improve our digital world.

VOA: How is it that social media isn't social in your view? Certainly, many, many people could tell stories of reconnecting with old friends, finding love online and the like.

AK: "Facebook and Twitter are just platforms for broadcasting ourselves where we dip in and out of communities, we form communities at will, we have no real obligation. that disappear. I think 'social' is where we lose ourselves and I think what the Internet has done, it doesn't enable us to lose ourselves.

"The ultimate cultural manifestation of the Internet is the 'selfie.' The 'selfie' as the quintessential, almost inevitable conclusion, where all we are left with is ourselves. We're not able to see anything in the world except ourselves. What the Internet has done has placed us at the center of the universe. It's a delusion."​